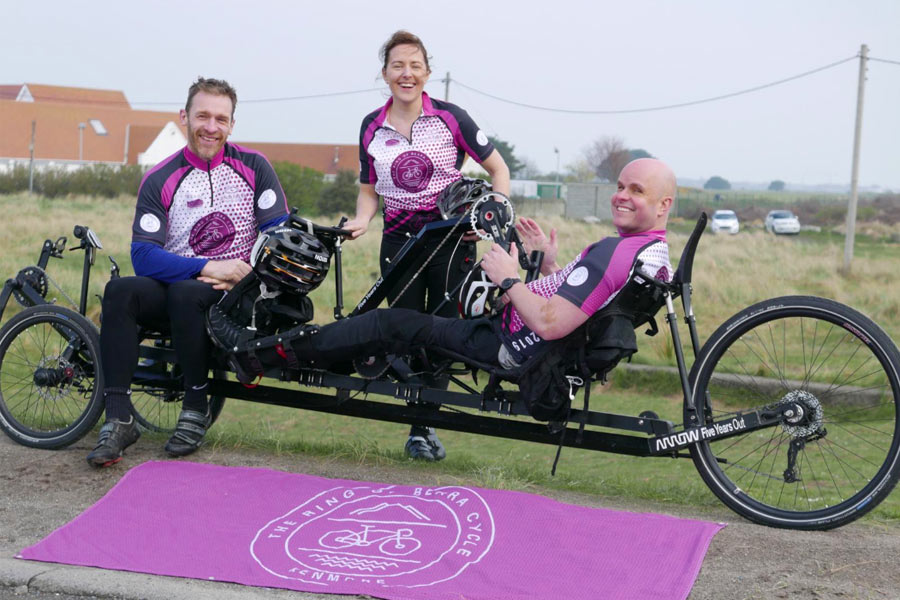 Mark Pollock and a team of supporters and fundraisers have been hitting the roads in and around Dublin City in preparation for the Ring of Beara Cycle Kenmare 2019.  Mark will undertake the 110km cycle with tandem pilot Simon O’Donnell, a team mate in his trek to the South Pole, and a team of 35 other cyclists to help raise awareness of his mission to cure for paralysis in our lifetime.

The Ring of Beara Cycle Kenmare takes place on Saturday 25th May 2019 and will see more than 4500 cyclists take to the roads and hills of the Beara Peninsula. Now in its fifth year the popularity of the event has grown exponentially, selling out in under 24 hours in recent years.

Mark Pollock says, “When I lost my sight, I rebuilt my identity as a blind adventure athlete but when I became paralysed, I feared I would never be able to compete again. Thanks to a custom-made tandem hand bike, I’m back in the saddle with my former South Pole teammate Simon O’Donnell, and looking forward to the Ring of Beara cycle in May. I believe we all achieve more than we thought possible when we collaborate so I’m excited that 35 supporters are joining our Team Unbreakable.

Paula Cunniffe, CEO of Mark Pollock Trust, says “The Ring of Beara is one of the highlights of the Irish cycling calendar so as a keen cyclist, I was delighted that we were invited to take part. Teamwork and collaboration is inherent in successful businesses as much as in sport, so I want to thank Ring of Beara Cycle Kenmare and the members of Team Unbreakable who are supporting Mark and his mission to cure paralysis.”

Oliver Kirwan, Event Director for the Ring of Beara Organising Committee said, “We are delighted and privileged to welcome Mark and his teammates to Ring of Beara Cycle Kenmare 2019.  We have a huge respect and admiration for his work and if we can help in anyway to support that through the cycle we will. Having the team with us is going to make the day even more special for all involved.”

Since 2011 Mark and his team have co-created projects valued at over €2.5 million involving: rehabilitation; robotics; exercise physiology; neuro modulation; neuroscience; bioengineering; and pharmacology. Mark believes many of the world’s greatest scientists and technologists have discovered breakthroughs that have the potential to impact paralysed people’s lives in the next 5 years. Yet, the interventions are held hostage in the minds and labs of these spectacular researchers due to systemic failures in translating research from the lab to the clinic.

You can find more information about Mark Pollock and his mission here.

Ring of Beara Cycle 2020 sells out within 24hrs This website uses cookies to improve your experience while you navigate through the website. Out of these cookies, the cookies that are categorized as necessary are stored on your browser as they are essential for the working of basic functionalities of the website. We also use third-party cookies that help us analyze and understand how you use this website. These cookies will be stored in your browser only with your consent. You also have the option to opt-out of these cookies. But opting out of some of these cookies may have an effect on your browsing experience.
Necessary Always Enabled
Necessary cookies are absolutely essential for the website to function properly. This category only includes cookies that ensures basic functionalities and security features of the website. These cookies do not store any personal information.
Non-necessary
Any cookies that may not be particularly necessary for the website to function and is used specifically to collect user personal data via analytics, ads, other embedded contents are termed as non-necessary cookies. It is mandatory to procure user consent prior to running these cookies on your website.
SAVE & ACCEPT
Manage Cookie Consent
To provide the best experiences, we use technologies like cookies to store and/or access device information. Consenting to these technologies will allow us to process data such as browsing behavior or unique IDs on this site. Not consenting or withdrawing consent, may adversely affect certain features and functions.
Manage options Manage services Manage vendors Read more about these purposes
View preferences
{title} {title} {title}
×